Skip to main content
Mechon Hadar Blog
Some of us are complicit in racism
Tuesday, May 30, 2017

Rabbi Shai Held on racism and violence in CNN "Some of us are complicit in racism" on Monday, May 29, 2017. Read the full text below or here

Perhaps all the other acts of hate distracted you. This past Friday, in Portland, Oregon, a suspected white supremacist killed two men who refused to be passive bystanders as the assailant spewed anti-Muslim slurs at two women. And on Monday, an ISIS-linked terrorist savagely murdered 22 men, women and children at a concert in Manchester, England.
Amidst all the carnage, you may have missed the story of Richard Collins. If so, you missed a story that we must not ignore: Richard Collins III, a young black man and a student at Bowie State University, was murdered after he refused to step aside to let a white student pass by.
While we don't know with certainty whether Collins was killed because he was black, we do know that the young man who killed him was a member of the Alt-Reich, a Facebook group overrun by invective against women and people of color.
If the possibility that a young black man was murdered on the street next to a major American university for no other crime than being black doesn't chill us to the bone, then we ought to pray for our very souls.
Rabbi Abraham Joshua Heschel famously remarked that racism is an "eye disease"-- and it is surely that, but it is also a disease of the mind, of the heart and of the spirit (Heschel himself called it a "cancer of the soul").
How easily and frequently we forget that in demeaning others we compromise not only their dignity but also our own. As James Baldwin put it, "Whoever debases another is debasing himself." Few things have debased white America like its own stubbornly entrenched racism.
Racism is a crime against God. In insisting, whether in word or in deed, that white people are better or worth more than black people, we deny the very first chapter of the Bible, which tells us that God created human beings -- all human beings, black or white, male or female -- in God's own image. To belittle or assault God's creatures is thus to be guilty of blasphemy and sacrilege. 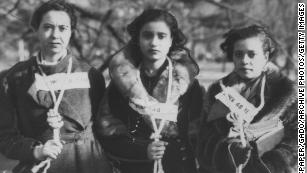 Lynching re-emerges in new rhetoric of hate
But haven't religious people often condoned racism, and even marshaled religious texts to legitimate and intensify their hate? Yes they have, and that is one of the enduring disgraces of organized religion. It is a shameful legacy we all bear. Let us have no doubt what God makes of such religion: it is an abomination that stinks to high heaven.
For all the real progress America has made, we live in a country in which a major political party still seeks to strip black people of the vote (as political scientists have shown time and again, there is no greater fraud in American politics than the allegation of voter fraud); in which black parents of all economic classes feel the urgent need to warn their children about how easily they could wind up dead in an encounter with law enforcement; in which a man, accused of discrimination at the start of his career, was recently elected President; and in which, as an ocean of social scientific research amply demonstrates, African Americans face significant headwinds in their attempts to climb the socioeconomic ladder.
The murder of Richard Collins III ought to be a moment of truth for us. Racism is this country's original sin, and though it has evolved and mutated over time, it is very much still with us. Those of us who believe in the God of the Bible, the God who loves widows and orphans and outsiders, can and must help lead this country to a better future.
Let us make it clear that robbing people of their right to vote is sinful, shameful and unacceptable. Let us work to heal the breach between police departments and black communities. And let us correct those congregants, parishioners, elected officials and opinion makers who deny, against all evidence, that racism remains a powerful force in American life.
Most fundamentally, let us call all Americans to repentance for our failure to internalize the simple truth that none of us is more human than any other, and none of us is less so. Then, and only then, will we really be worthy of being considered genuine leaders of faith.
As a nation, we should hang our heads in shame. Those of us who claim to worship should beg for forgiveness and mercy. Will we ever learn?
Category: Op-Eds by Faculty
VIEW FULL POST
Yom Yerushalayim: The messiah’...
R. Ethan Tucker offers thoughts on the 50th Yom Yerushalayim in the Times of...
Read More >>
From Convincing to Understandi...
Lisa Exler, Director of the Curriculum Project at Hadar, describes seeing the ...
Read More >>
Letter 97: American Values Rel...
Dear President Trump, Vice President Pence, Members of the Trump Administration...
Read More >>
Trump Reshaping Community, Fro...
R. Elie Kaunfer, was one of the "emerging thought leaders in the Jewish...
Read More >>
view all posts
About
Mechon Hadar

Mechon Hadar is an educational institution that seeks to empower a generation of Jews to create and sustain vibrant, practicing, egalitarian communities of Torah learning, prayer, and service.